Monique shows the brass charm to students at Our Lady of Pompei.

As part of Holocaust Education Month, author Monique Polak visited two elementary schools –  Our Lady of Pompei in Ahuntsic and Westmount Park   to read from  The Brass Charm. This marks her first picture book for children. In it she  tells the story of a gift from a perfect stranger that her mother (the late Celien Spier) received on her 14th birthday while a prisoner at the Nazi concentration camp  in Czechoslovakia called Theresienstadt during the Holocaust.

Over the next few months Monique will be making other school visits.

The story revolves around Tali, who  is staying at her Oma’s (grandmother)  apartment after a storm demolishes their house. She is upset at losing everything. “People have survived worse,” says her mother ― Oma survived World War II, and never speaks of it. “But that night, Oma shares her story of Holocaust survival, the brass monkey charm that she was given in the camp, and a message of kindness and perseverance in the face of disaster.

As Monique describes it, on May 24, 1943, her mother was sitting on a stoop crying when someone tapped her on the shoulder. “She turned around. She saw a tall, beautiful lady with brown hair,” Monique recounted of her mother’s experience. “She said: ‘Little girl, why are you crying?’ And my mother said, ‘I’m crying because it’s my birthday and nobody gave me anything.’ And the woman gave my mom the monkey man.’”

This “monkey man,” was a tiny figurine of an ape-like creature fashioned from brass. Her mom   never again saw the unidentified woman who gave it to her. Monique believes, based on past research, that she may have been deported to Auschwitz where she was likely killed. But her extraordinary act of kindness lives on nearly 80 years later, to be treasured by children and adults alike.

In a Montreal Gazette interview, Monique said she  only saw the monkey man for the first time and learned the story behind it in 2013 — some 70 years after it was given to her mother. After surviving Theresienstadt and being liberated by the Russians in 1945, her mom moved to Montreal, got married and had a family. She didn’t speak of the Holocaust for the next 60 years. She certainly never spoke of the brass charm. And Monique never came across it growing up, even when she and her sister would dump the contents of her mother’s jewelry box on the bed to play as children. But her mother kept it secreted away somewhere, revealing this key to her past only after Monique had unlocked her story of survival — reluctantly — for another book, What World is Left.

A fictionalized account based on her mother’s experiences in Holland during the Holocaust, the book was first published in 2008. When the Dutch translation came out in 2013, Monique said her mother and father accompanied her on a press tour to the Netherlands.

“The night before we left, my mom came over, I had a barbecue on the balcony, and she said, ‘I want to give you this.’ And it was this ugly, little brass charm,” Polak recalled. “When my mom gave it to me, I did the thing I always do. I said: ‘What’s the story?’ The same night. And that’s when she first told me the story.

“Now I understand more, that sometimes you can re-traumatize a person. Maybe it was too much for me to ask my mother. But I think it was great for both of us,” Polak said of the first book based on her mother’s life. “It was very good for her, for her heart. And she would sometimes accompany me on school visits.

“And her thing was: ‘Never give up hope.’ I think that’s the message of The Brass Charm. Because my mom would say, ‘The Nazis took everything from us. They took our home, they took our school, they took our families, our things, our objects, but the one thing they couldn’t take away was our hope.’”

The Holocaust is an unusual topic for children’s literature and Monique said her editor had always vowed she would never do a picture book on that tragic era — until she came across The Brass Charm.

“I spent five years working on this book and it’s 900 words,” she said. “Most people think picture books are easy to write and that you write them on a napkin at dinner or that they’ll tell their kids a story and they’ll be as famous as Robert Munsch by Monday. But picture books are very, very hard to write.

“Picture books are not only for little kids. I love them. I love books, I love literature. I love books for kids. But they are magic to me. They’re a way of discussing all kinds of subjects. And they’re intergenerational. The adult has to like reading it, too. They’re meant to be read out loud, shared. And the art. The art could not be more beautiful.”

Just before the monkey man was immortalized, he disappeared. Monique was on the way back from a wedding in Newport, R.I., on July 25 and left her hotel in a hurry that morning. She had noticed that the chain around her neck felt a bit loose. After making several stops on the way home to Montreal, including lunch in Londonderry, N.H., she reached down to touch the charm, as she so often did, while in a grocery store in Colchester, Vt. The necklace was there, but the monkey man was gone.

Monique and her boyfriend scoured the store and the car. She phoned the restaurant and called the hotel. She got in touch with local newspapers, which did write-ups on the missing pendant. She offered a $200 reward. But it hasn’t turned up. “I was devastated, but to me, devastated about a thing, I know it’s not appropriate,” Monique said. “In the end, the monkey man is just a thing. I lost the thing. I have the story.”

But the legacy of the charm — and the woman who first offered it — has not been extinguished. Kind strangers reaching out to help search for the tiny figure have brought Polak comfort. Fortuitously, a jeweler she’d told the story to once, had urged her to make a mold. So the monkey man has since been revived in silver — and replicas have been made for Polak’s daughter, her boyfriend’s daughter and the editor of the book. “I realized I should never have worn the original monkey man. I should have given him to the Montreal Holocaust Museum, where he belongs,” she said. “The reason I wore it all the time was so I could tell the story.”

And now she has — spreading the message of hope and humanity to a wider audience.

The Brass Charm was published by Scholastic this fall in both English and French with illustrations by Marie Lafrance. The French version is called Le Trésor d’Oma (Oma being Grandma in Dutch).

See Monique’s blog about her visit to Our Lady of Pompei: http://www.moniquepolak.com/monique-s-blog/entry/yesterday-s-visit-to-our-lady-of-pompei-elementary-school 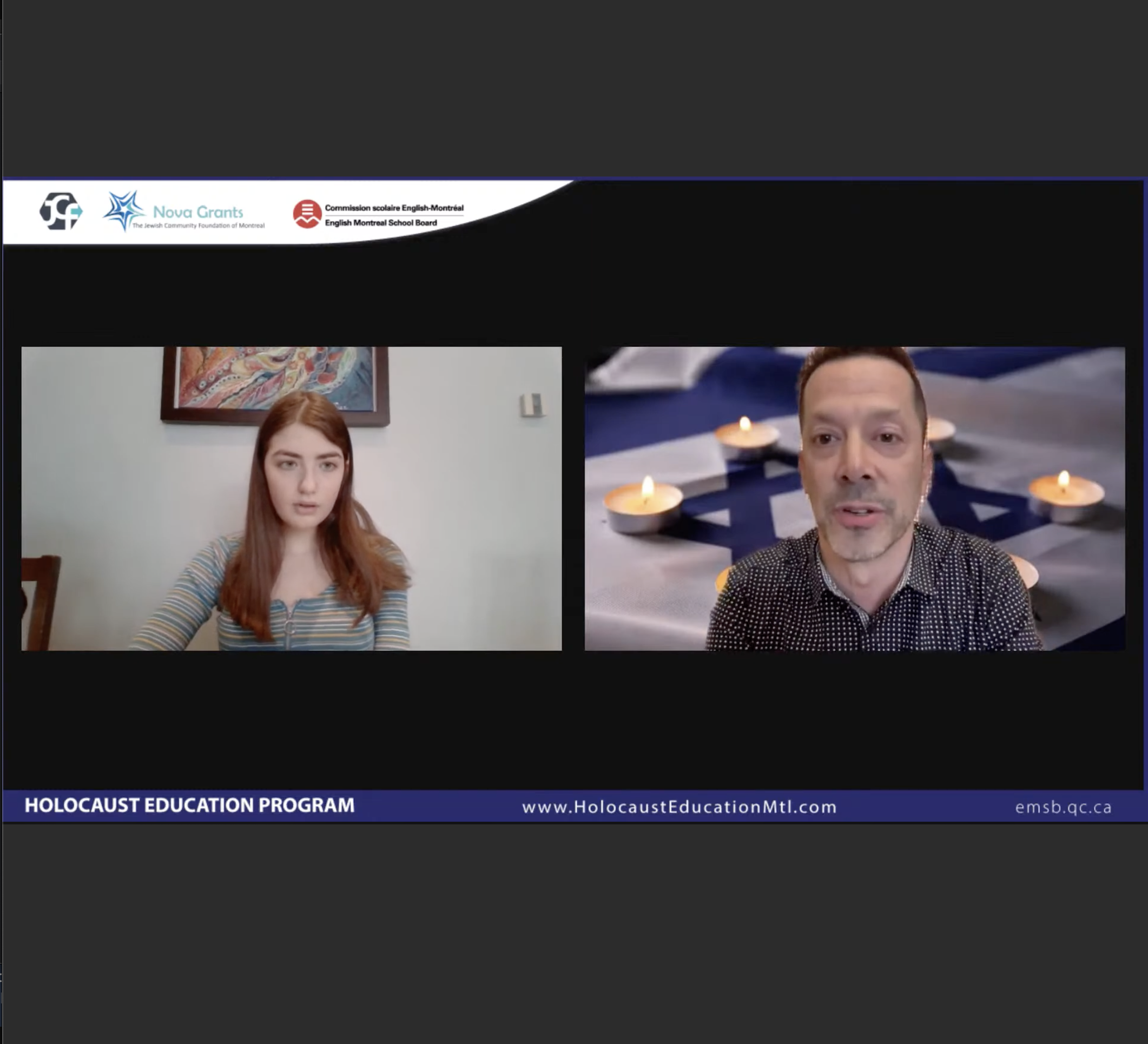 By Eliane Goldstein  On January 27,  2023 the English Montreal School Board held a panel discussion about the Holocaust and anti-Semitism on the occasion  of 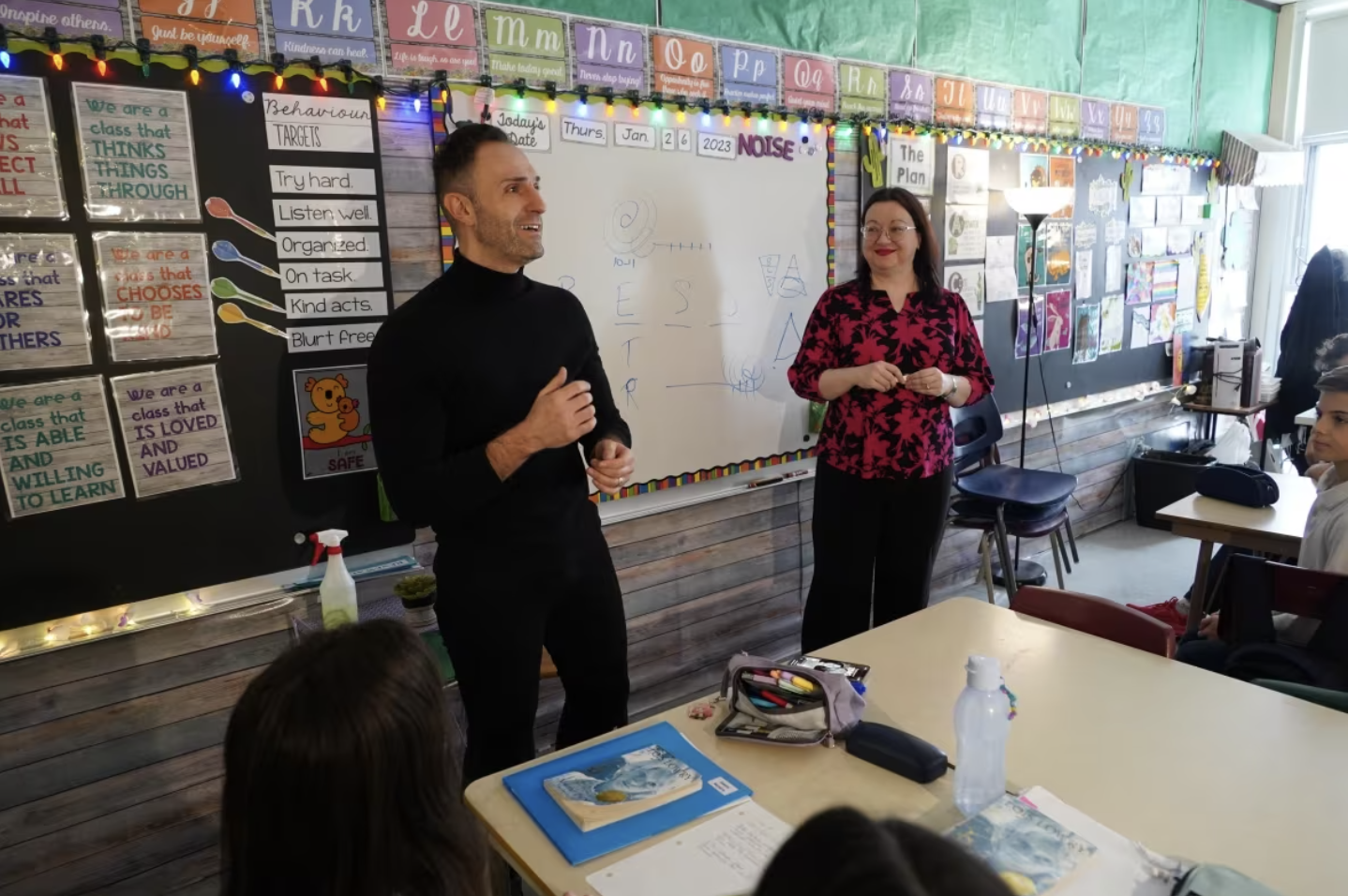 Vince Lacroce, a community and spiritual animator for the English Montreal School Board, and elementary teacher Michelle Santilli work together to weave Holocaust education into 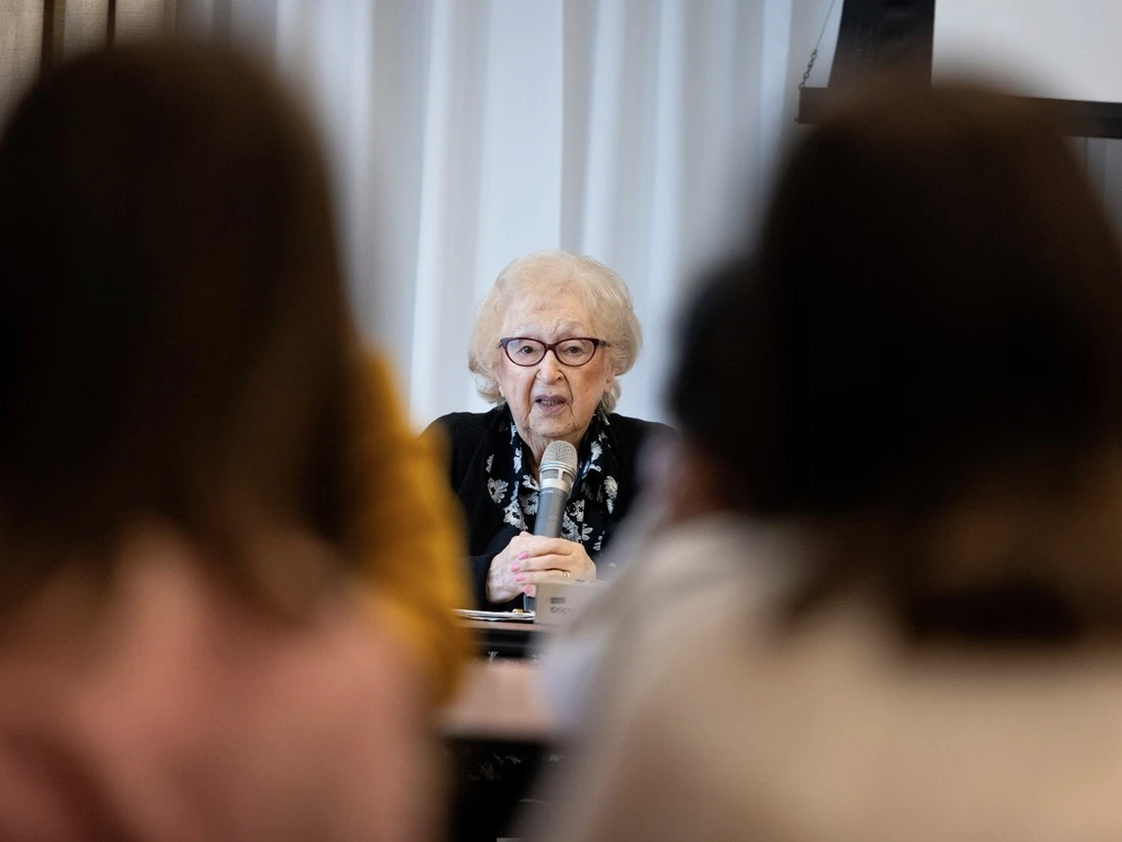 Holocaust survivor Muguette Myers, 91, speaks to schoolchildren at the Montreal Holocaust Museum on Jan. 23, 2023. The museum is down to a dozen active